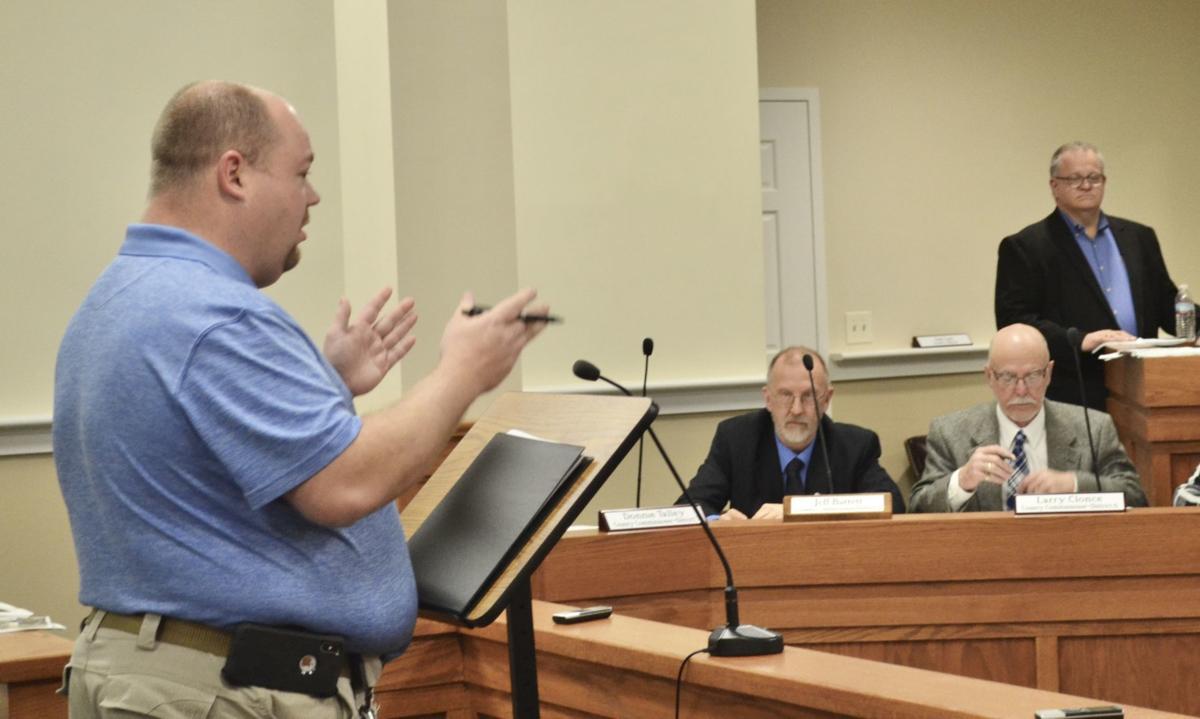 EMA Director Jamie Miller (left) told the Commission that the county could receive up to $420,000 from a CDBG grant. 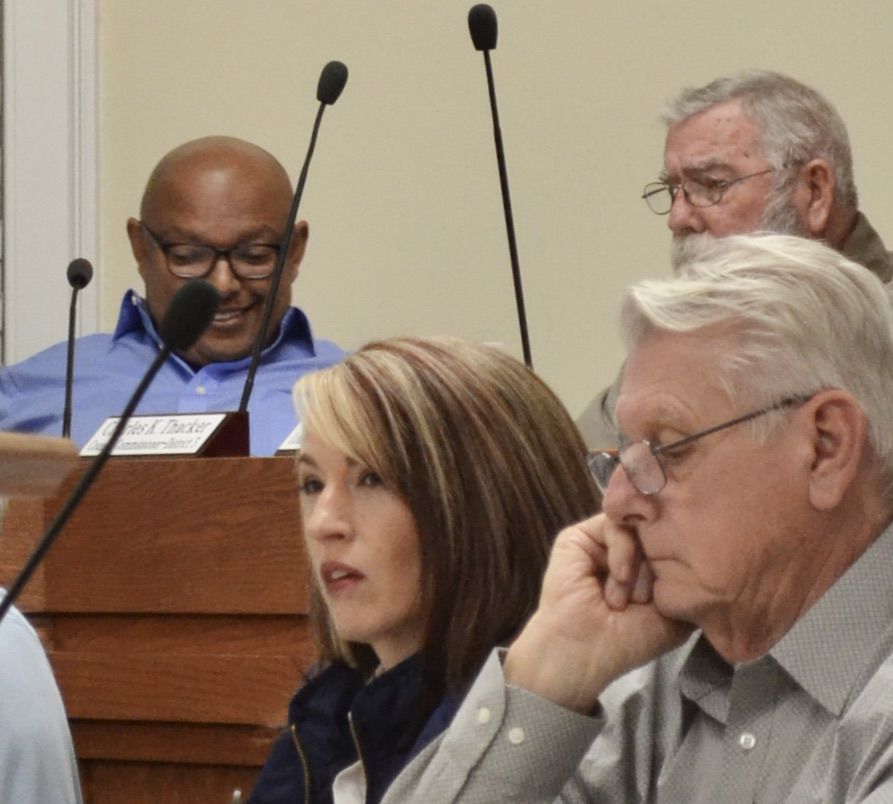 Commissioner Mike Herrell (back left) extensively questioned EMA Director Jamie Miller about the total project cost and just how much the county will have to pay after the grant.

The discussion surrounding the Emergency Communications system lasted for well over an hour, and several of the commissioners began to look tired. 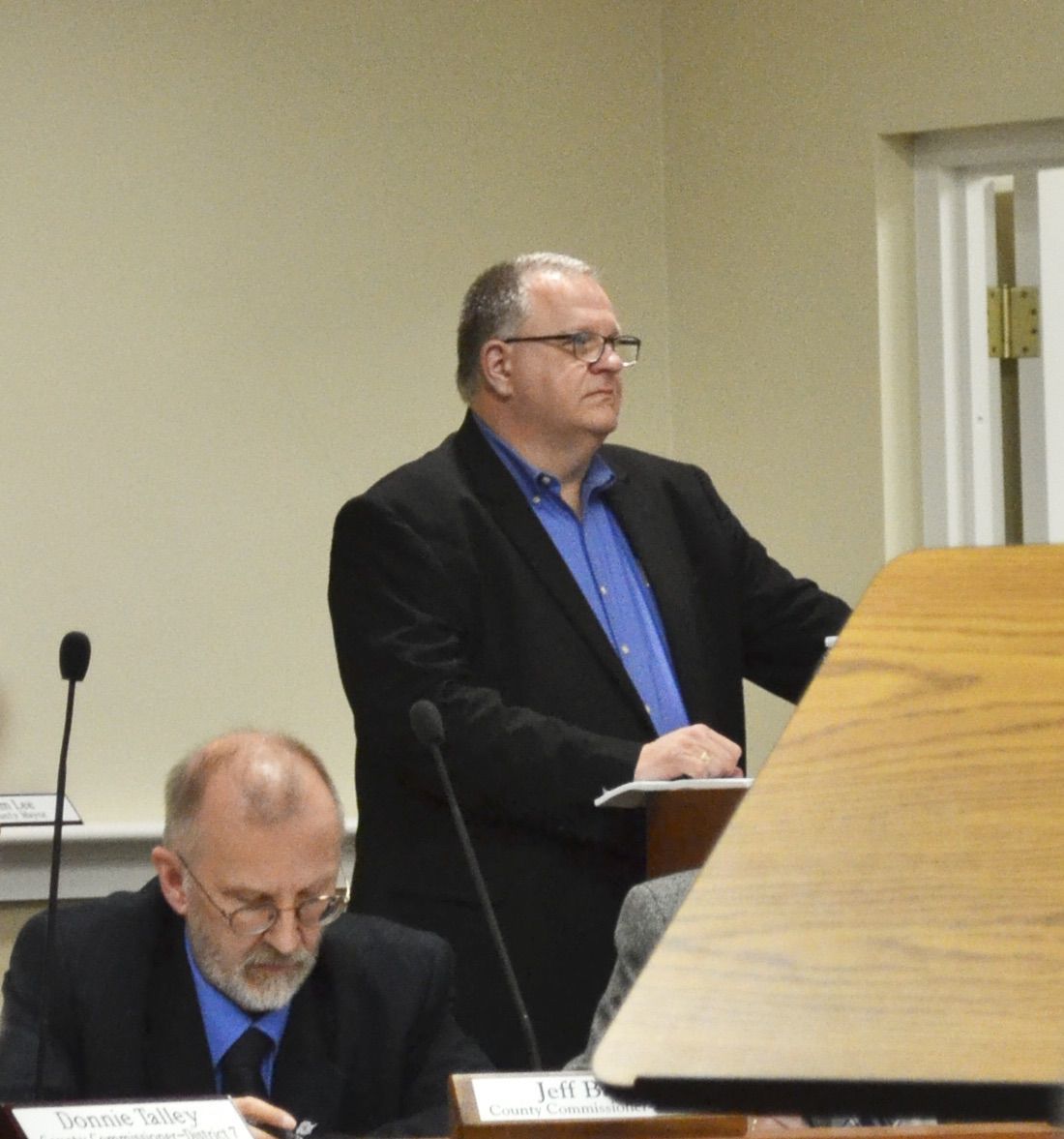 Mayor Jim Lee told the Commission that he wanted to “think outside the box”by choosing Community Development Partners, LLC. instead of the First Tennessee Development District. He also said that they come highly recommended.

EMA Director Jamie Miller (left) told the Commission that the county could receive up to $420,000 from a CDBG grant.

Commissioner Mike Herrell (back left) extensively questioned EMA Director Jamie Miller about the total project cost and just how much the county will have to pay after the grant.

The discussion surrounding the Emergency Communications system lasted for well over an hour, and several of the commissioners began to look tired.

Mayor Jim Lee told the Commission that he wanted to “think outside the box”by choosing Community Development Partners, LLC. instead of the First Tennessee Development District. He also said that they come highly recommended.

Hawkins County’s malfunctioning emergency communications equipment was again a point of contention at Monday’s Commission meeting, and more than an hour of discussion was devoted to the topic.

Though the county will likely have to pay a large sum of money to get the system up and running again, a resolution that passed Monday night after being amended authorized the county to apply for a CDBG (Community Development Block Grant) that could relieve up to $420,000 of the cost and would work out to roughly an 80-20 split with the county.

What’s the problem with the system?

As Miller explained, Hawkins Co.’s radio communication equipment, which is used by law enforcement, EMS and fire departments within the county, has experienced three complete outages since the beginning of November and has been completely offline since Dec. 18.

The system has been put back online with some outdated spare equipment. Though the system is now functioning, Miller told the Public Safety committee on Jan. 8 that the equipment is not reliable and is not up to the standards that it was before the Dec. 18 outage.

In fact, when Commissioner Mike Herrell asked about repairing the current system, Miller said, “Every vendor we have had look at the system has said they won’t touch it—other than the one we had given $20,000 (for a service contract) who said they could have it back online in four hours and didn’t show up until eight hours later. We never were able to get an accurate solution.”

Miller and Lee also assembled a task force to determine which type of communications equipment to choose as a replacement, and they are meeting weekly. They are currently looking into two options: TACN (P25 Tennessee Advanced Communications Network) or DMR (Digital Mobile Radio).

Though they don’t have an official solution or figure for the total project cost, of a replacement system would be roughly $723,459 for DMR and $3,380,710 for TACN.

Up to $420,000 may be available In addition to assembling a task force, both Lee and Miller are pursuing grant funding to offset the cost of replacing the communication equipment. As aforementioned, the resolution approved by the Commission allows the county to apply for a CDBG grant that would generate up to $400,000.

The county would also receive a bonus for being a Three-Star community, which would bring the grant up to a max of $420,000 and would require roughly an 80-20 split with the county

Miller told the Commission on Monday that the grant application resulting from this resolution would cover either round.

“There’s a good chance we can apply for this money based on the emergency-need that we’re in now,” Miller said. “That’s based on the potential amount that’s available right now in that category. I feel confident that, if we don’t take that money, someone else will.”

The total funding for the emergency-need would be around $294,200 on an approximately an 80-20 split, but the exact figures would be worked out once the contract was signed. He also noted that, should the county receive the emergency-need grant, he was advised not to apply for the regular-round grant in addition.

He went on to add that, even if the county were granted this emergency-need grant, it would be several weeks to a few months before the county would actually receive the funds. Should the county be denied emergency status and apply only for the regular-round grant, this would take even longer.

When it came time for the commission to vote on the resolution, there seemed to be some confusion, as Herrell extensively questioned Miller about the total project cost and just how much the county will have to pay after the grant.

“I don’t like just writing a blank check, so we need to add what percentage of this grant we’re going to have to pay,” Herrell told the Commission on Monday. “We need to add a dollar amount. If not, we’re more or less giving you authorization to spend a million dollars if you want to.”

After a lengthy back-and-forth, it was clarified that Monday’s resolution only applied to the grant. Miller also explained that, after the results of the grant are in, the project itself is then brought back before the commission by resolution to decide how much to spend.

After continued back-and-forth, Commission Chairman Rick Brewer even asked to temporarily turn over the Chairman position to Vice-Chair Jeff Barrett so that he could partake in the discussion.

Commissioner Dawson Fields then made a motion to amend the resolution and specify a cap of an $80,000 match on the grant.

However, several commissioners, including Brewer, expressed their fear that adding that limit would hinder the county from being considered for the grant.

Fields’ motion was later withdrawn. Instead, Commissioner Keith Gibson then suggested that the verbiage specifying a cap of 20 percent county match.

The resolution as amended was then approved 20-0 with Barrett abstaining.

“Thinking outside the box”

A separate resolution was also brought before the commission that would allow Community Development Partners, LLC. to assist with the grant application. This company would charge a fee of around 6 percent of the grant for their services.

Commissioner Barker then pointed out that the county would incur no fee if they used First Tennessee Development District, as the county already has a contract with them and has used them many times before.

“I wanted to think outside the box and try something different,” Lee said of his choice. “They come highly recommended.”

“I personally know the individual who is working with Mayor Lee,” Brewer added. “When I was mayor of Bean Station, every grant that he applied for for us, we got.”

In the end, the commission voted 15-4 with Barrett and Herrell abstaining on the resolution. Commissioners Barker, Goins, John Metz and Syble Vaughan Trent voted no.