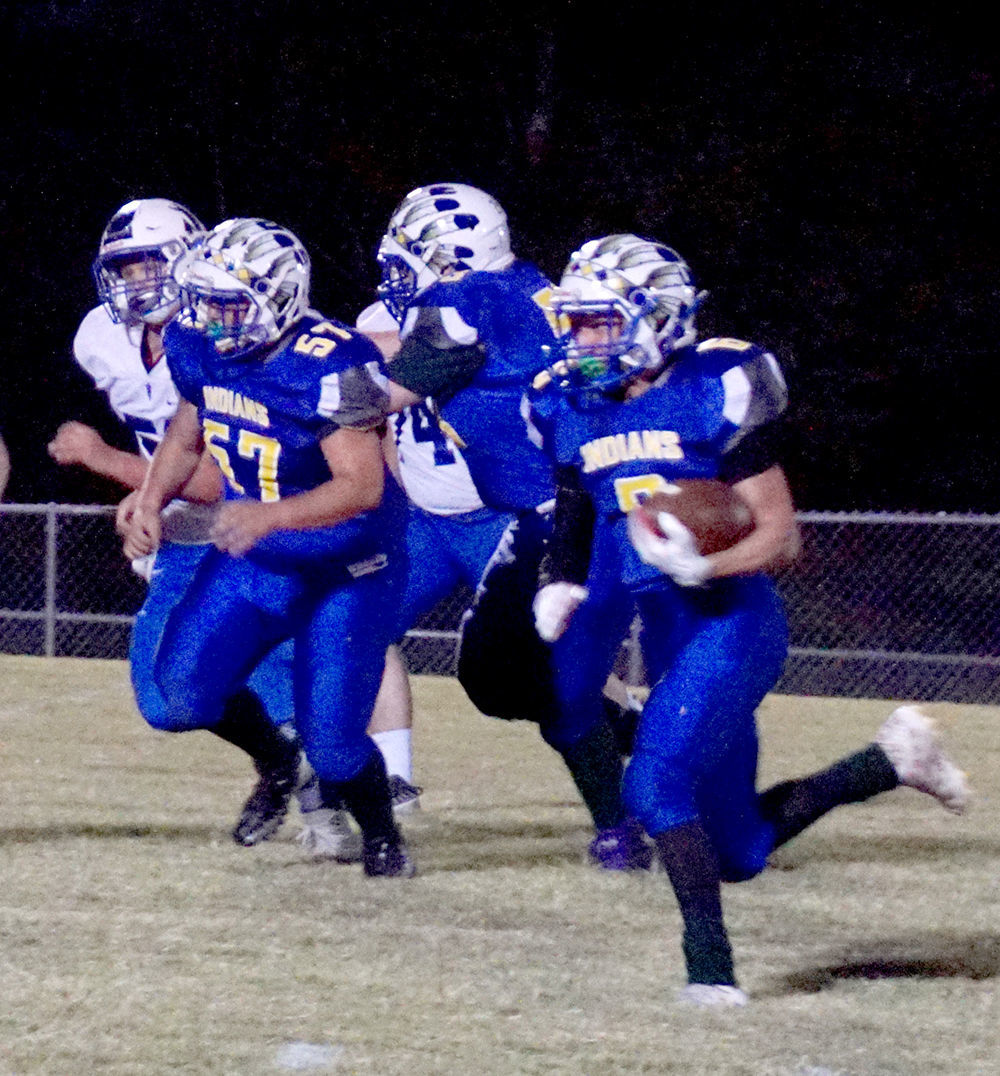 Darran Collins on his way to the game’s first touchdown. 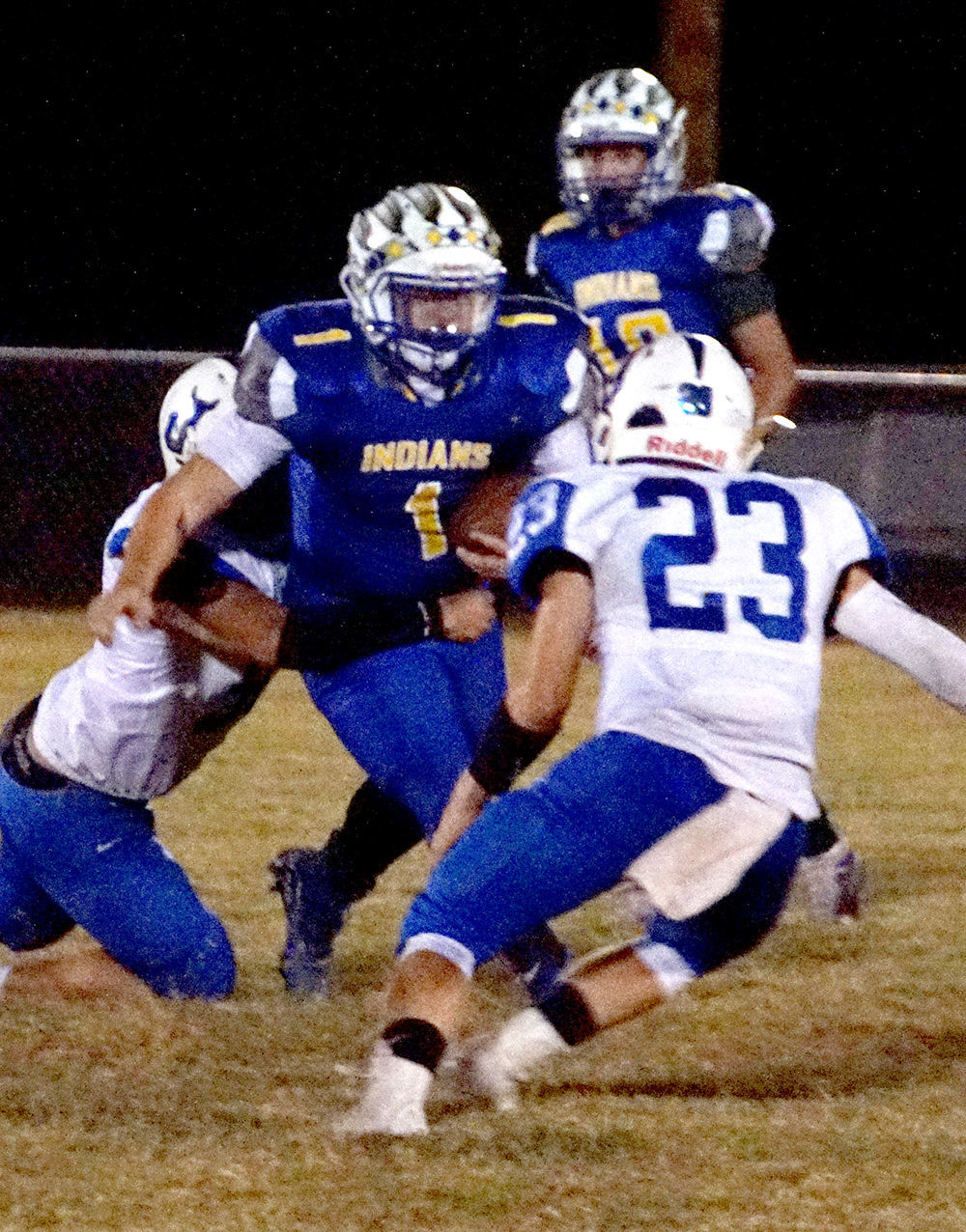 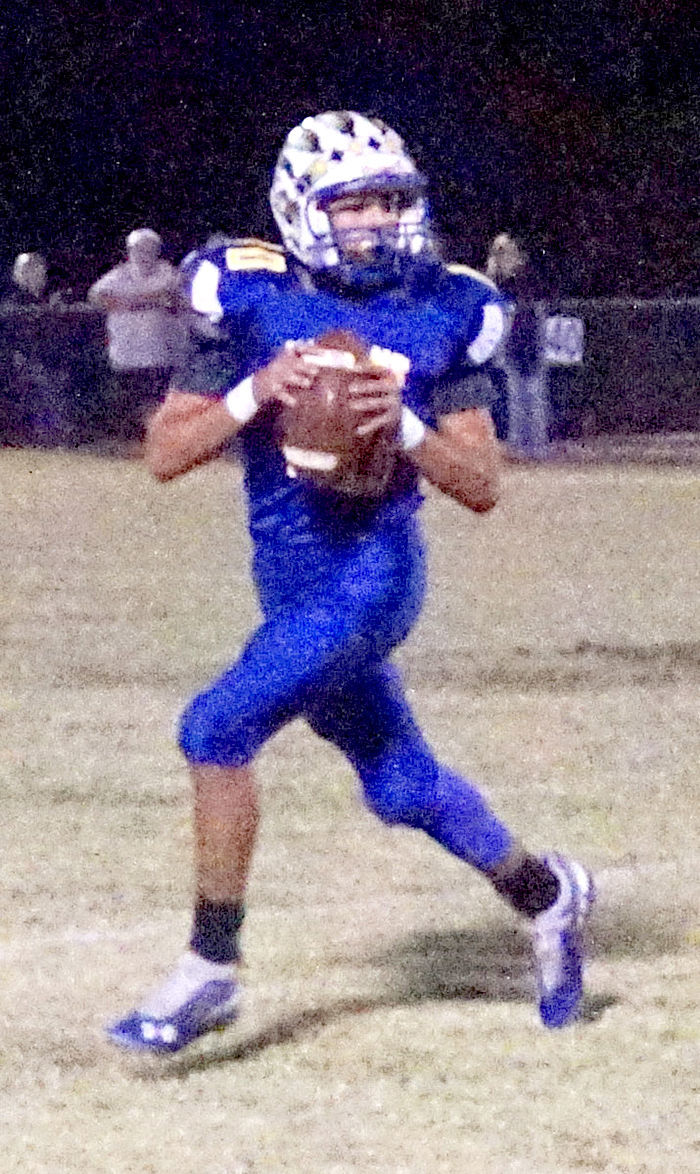 Devin Blevins looks for a receiver. 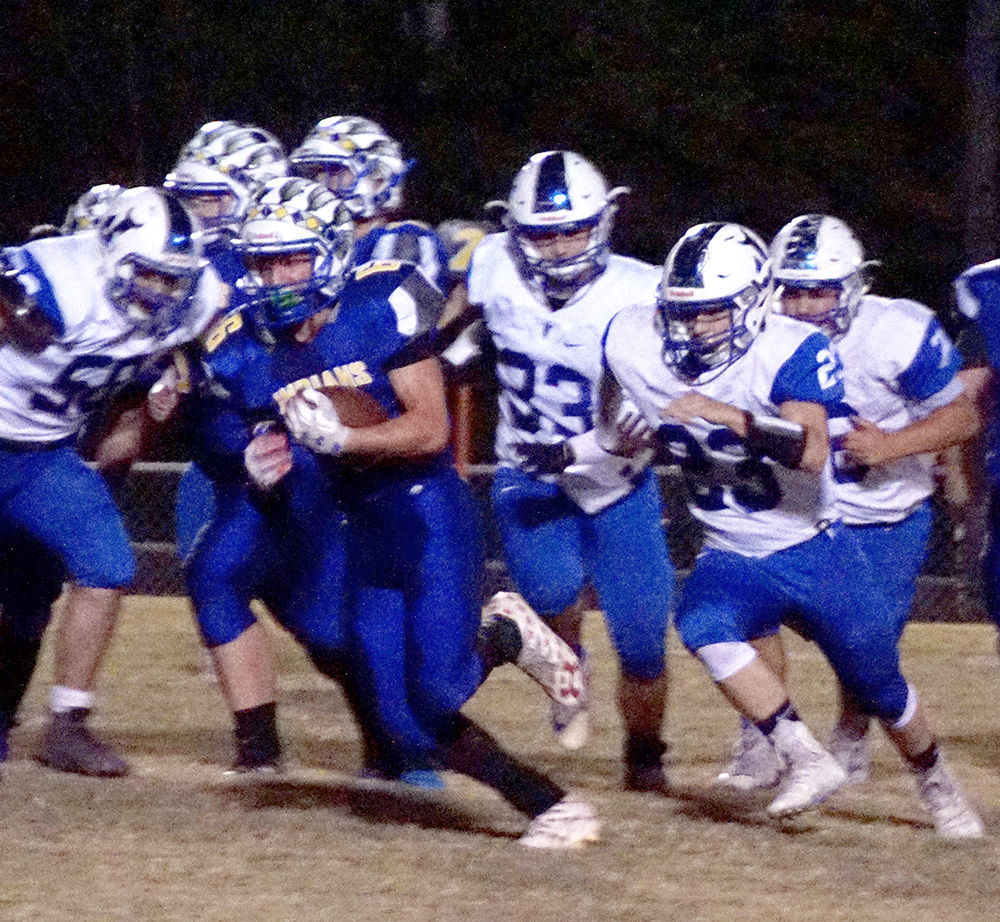 Darran Collins breaks away from the Blue Devils. 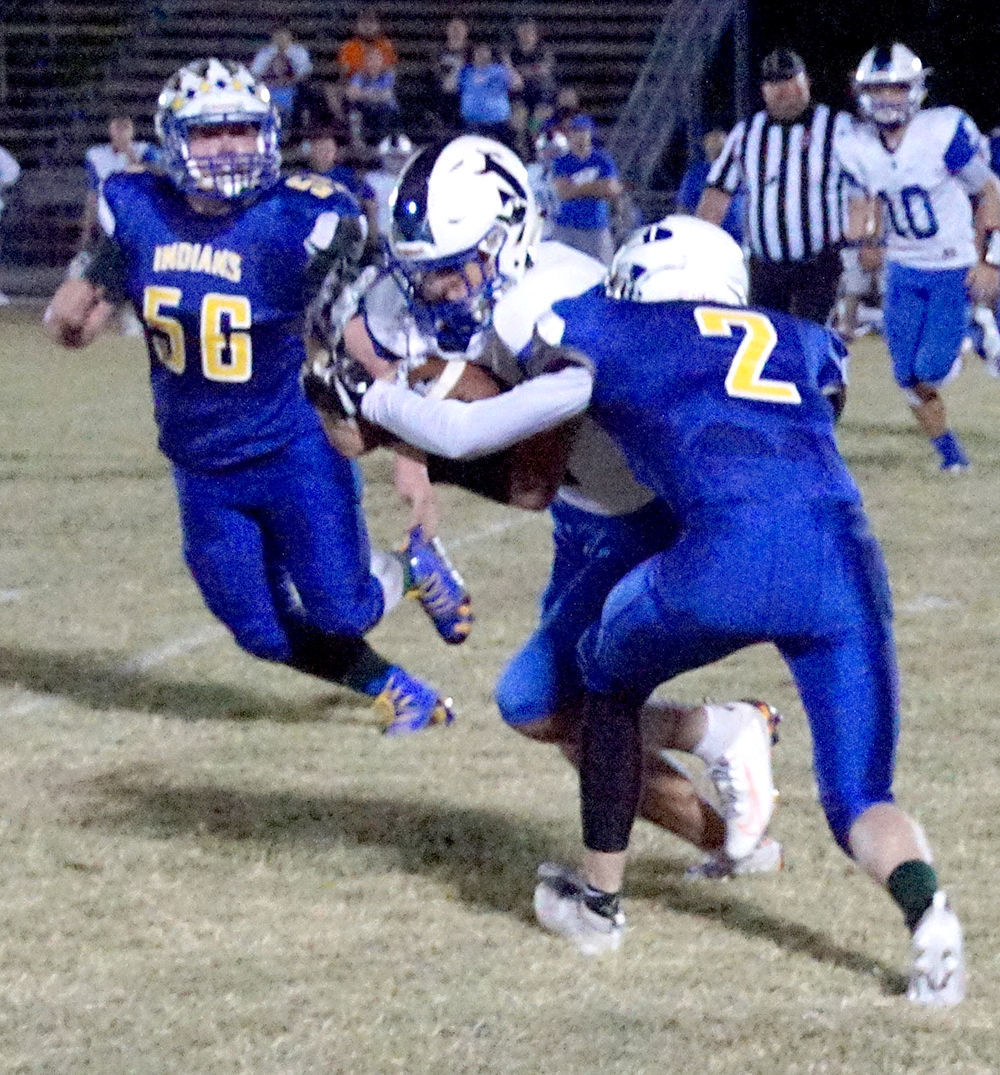 Treybeon Cooper (#2) and Preston Hatfield (#56) give the Blue Devils some grief on defense. 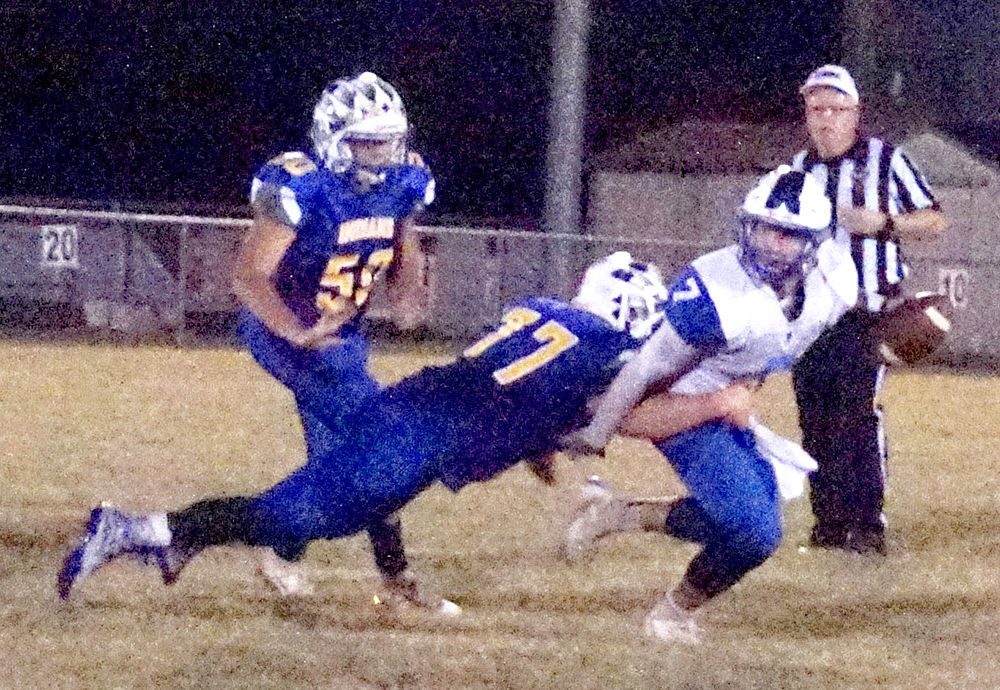 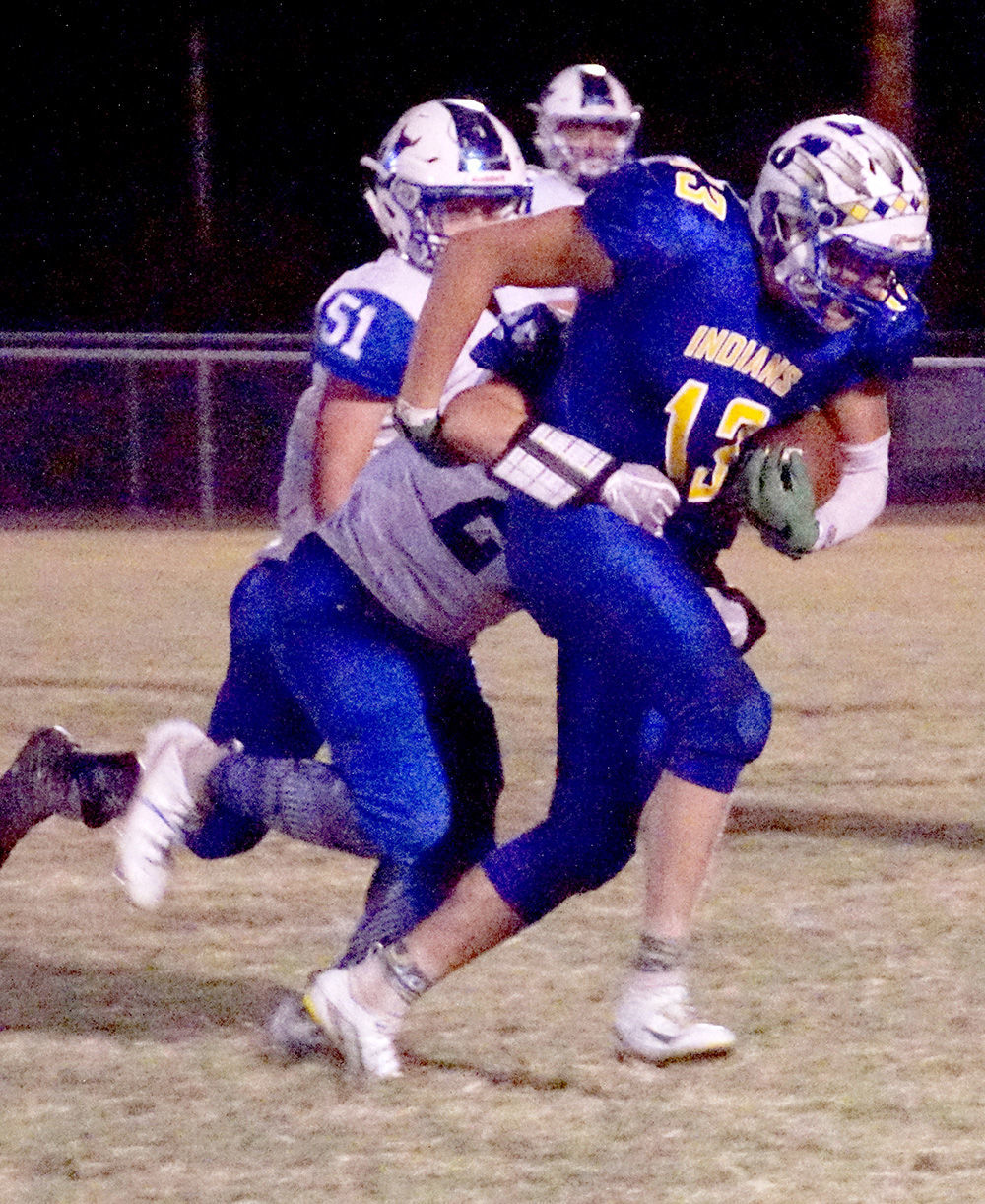 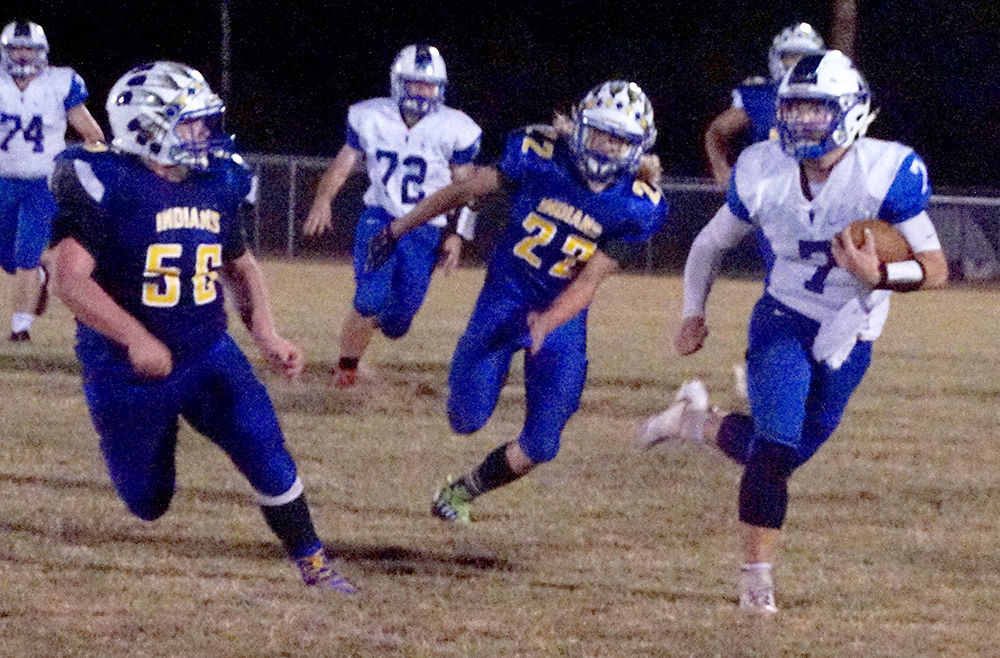 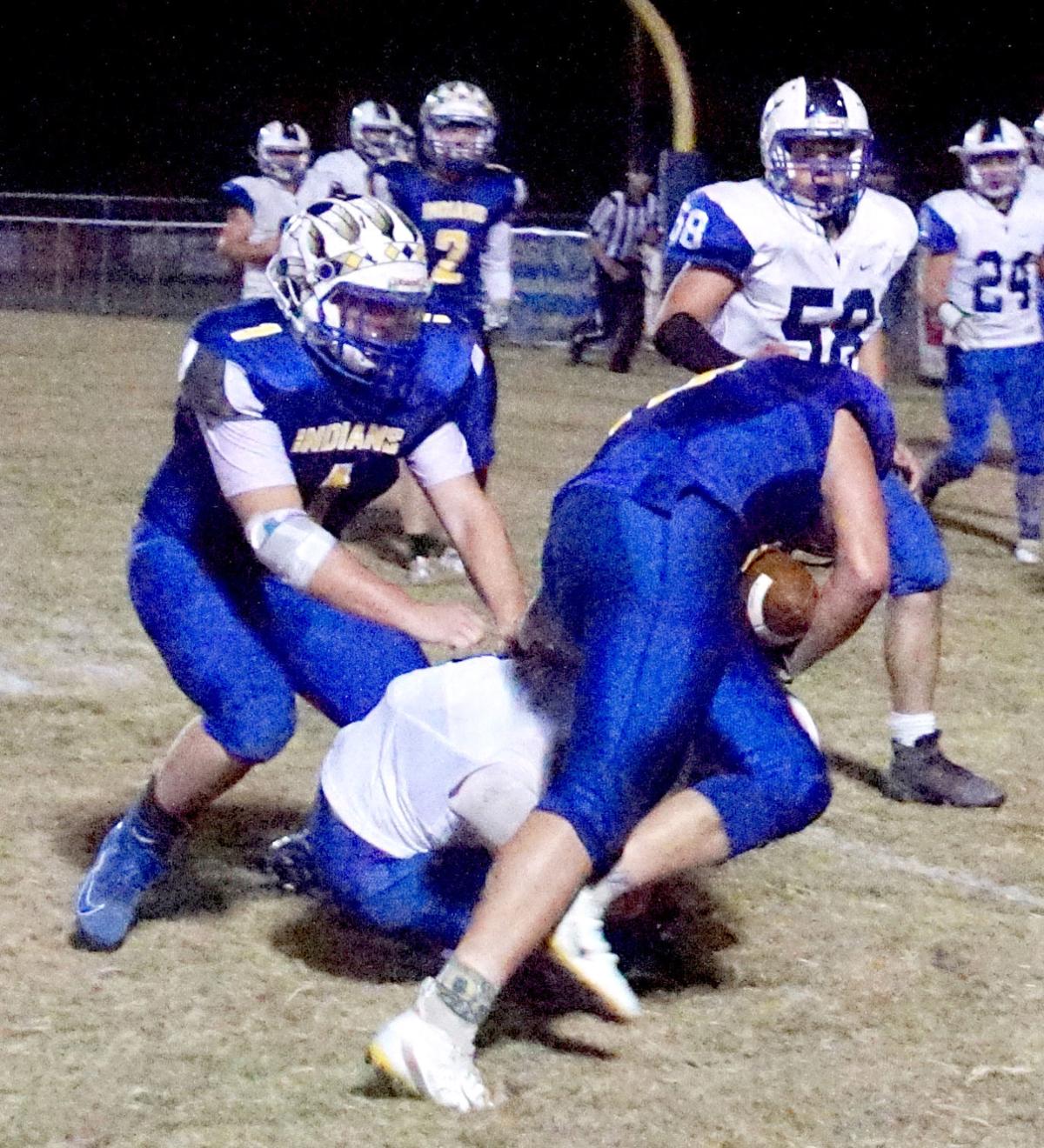 Ethan Short goes in for the touchdown.

Darran Collins on his way to the game’s first touchdown.

Devin Blevins looks for a receiver.

Darran Collins breaks away from the Blue Devils.

Treybeon Cooper (#2) and Preston Hatfield (#56) give the Blue Devils some grief on defense.

Ethan Short goes in for the touchdown.

SNEEDVILLE — The Hancock County Indians played their most dominating game of the year Friday night, Oct. 4, 2019, topping the Jellico Blue Devils 46-14. It was also a night in which the team and the community also turned out to pay tribute to Nathanael Seal.

The Indians jumped out quickly, holding Jellico to a third and out on their first series. Kameron Davis blocked the punt, giving the Indians the ball at the Jellico 35 yard line. Darran Collins scored a few plays later on a 25-yard run. Devon Blevins passed to Ethan Short for the PAT. The Indian defense held again, aided by a Short sack on third down. Collins again found the end zone, this time from 6 yards out. Short ran in the PAT to make the score 16-0.The defense didn’t let up, as Tyler Gibson had a quarterback sack and Trebeon Cooper intercepted a Blue Devil pass to end the drive.

The second quarter was scoreless. A scary moment came when quarterback Devon Blevins was injured by a hard hit on the sideline, resulting in Ethan Short being pressed into quarterback duty. The score was 16-0 at halftime.

In the third quarter the offensive line and Ethan Short took over the game. At the 9:11 mark, Short scored on a run and then carried in the PAT conversion to make the score 24-0.

Jellico got on the board with a pass across the middle. After the PAT conversion, it was 24-8. The Indians reacted with a touchdown on a short kickoff, with Short taking it 59 yards to score. On the next series, Preston Hatfield and Brady Johnson combined for a sack to help stop the Blue Devils. Jadon Royston went for 58 yards on first down. A few plays later, Short scored on a quarterback sneak, again with Short adding the conversion. The Indians were in control at the end of the third quarter 38-8.

In the fourth quarter, Daylon Barger scored on a 16-yard run. Jellico scored on the kickoff to finish the scoring.

“My team was motivated and inspired tonight as they played in honor of Nathanael Seal,” Coach Gibbs said. “I’m proud of the effort the guys displayed and it was a great win for us.”

The Indians will be on the road, Friday, Oct. 11, as they travel to Ewing, Virginia to take on Thomas Walker High School.