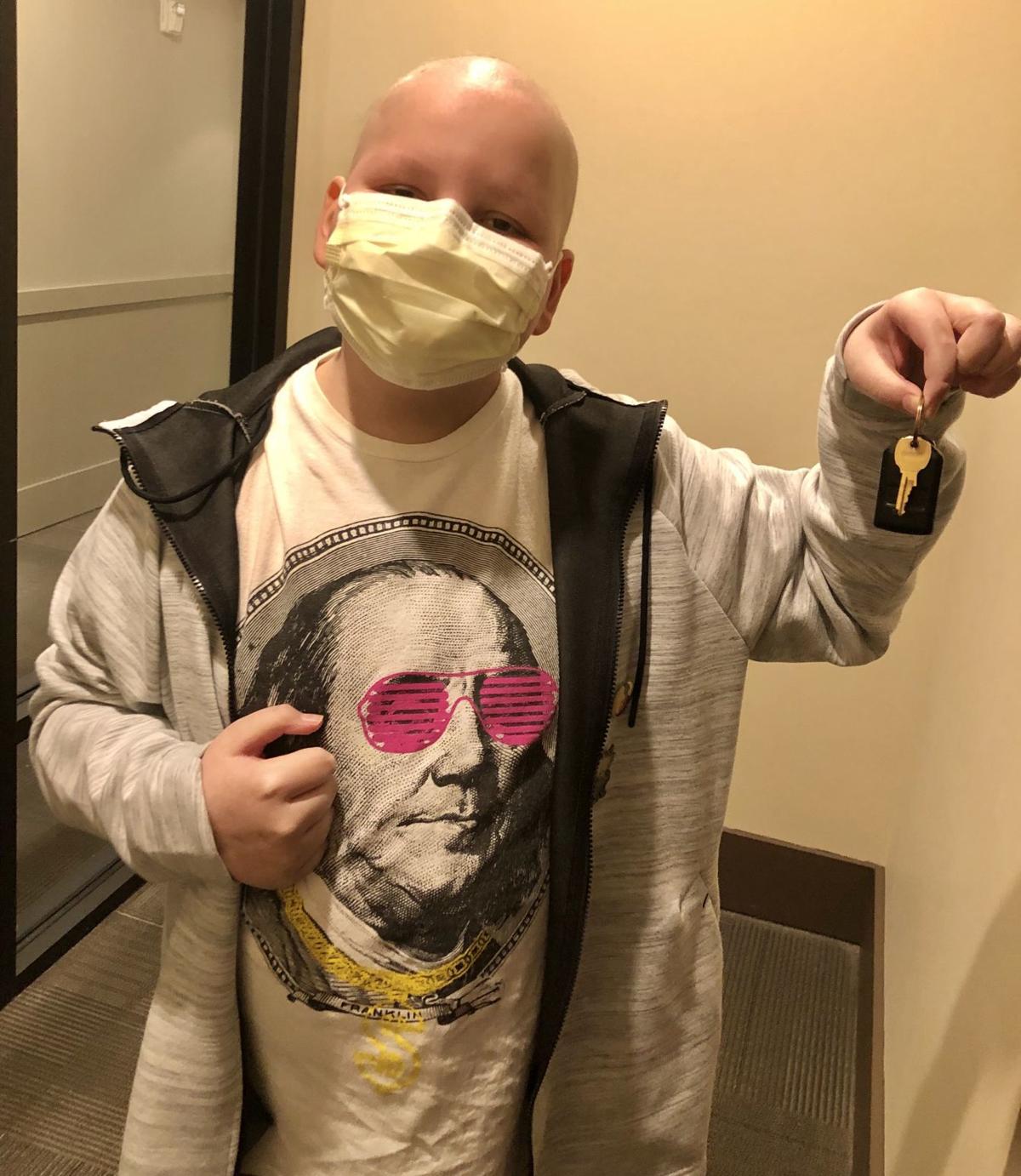 12-year-old Jacob Purscell proudly holds the keys to the new medical housing apartment that he and his mother now share. 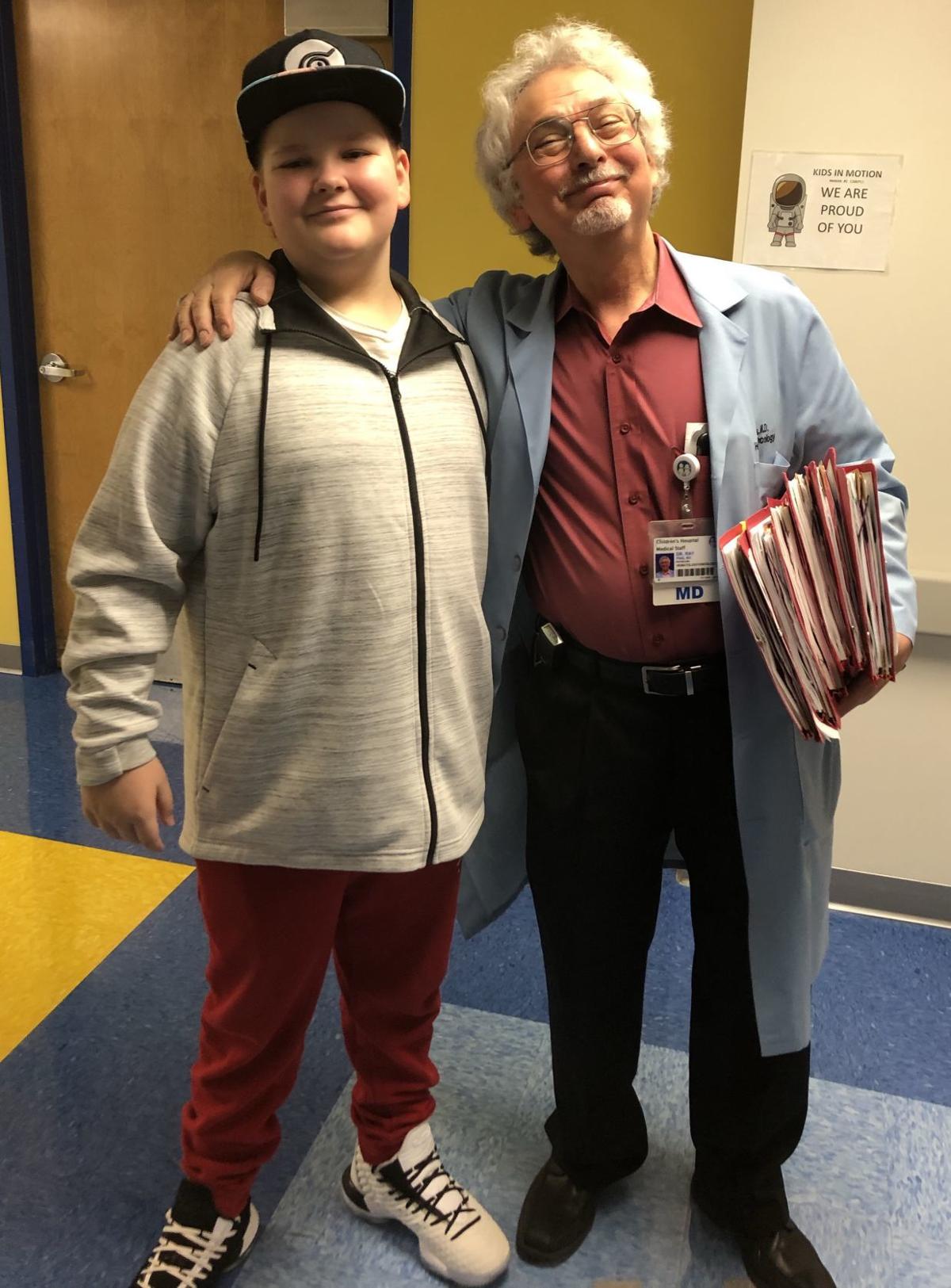 Jacob Purscell stands next to Dr. Ray Pais shortly after Jacob was diagnosed with T-AML. 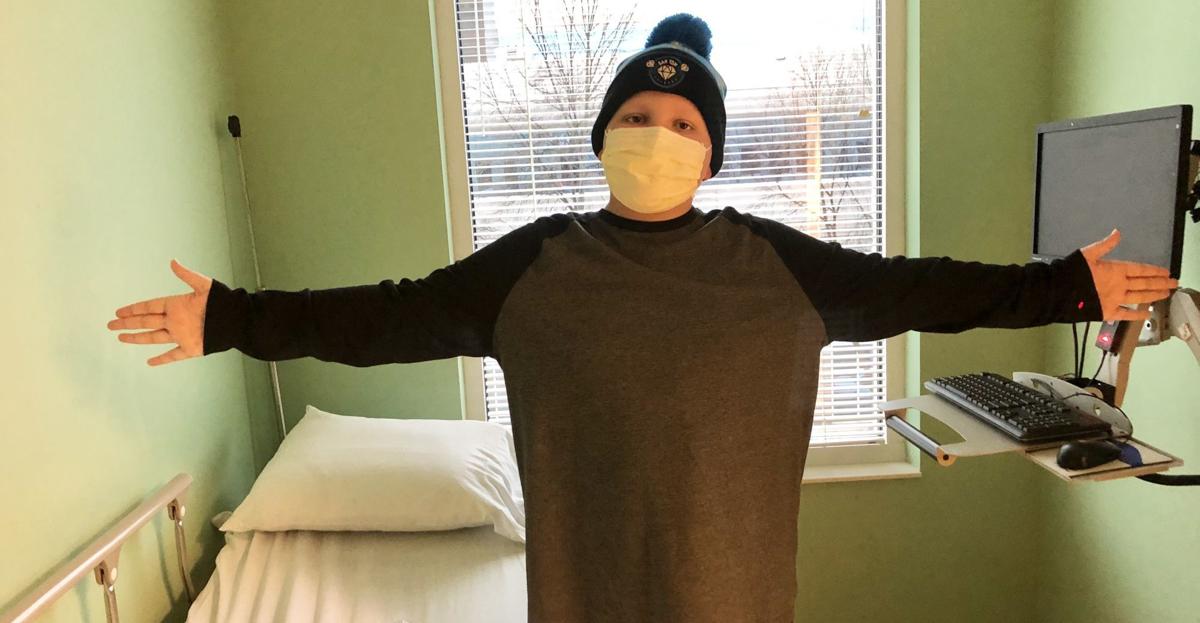 Because of complications from his T-AML treatment, Jacob’s immune system has been weakened, limiting the number of people who can come visit him. Nevertheless, his mother explained that Jacob handles everything with a smile. 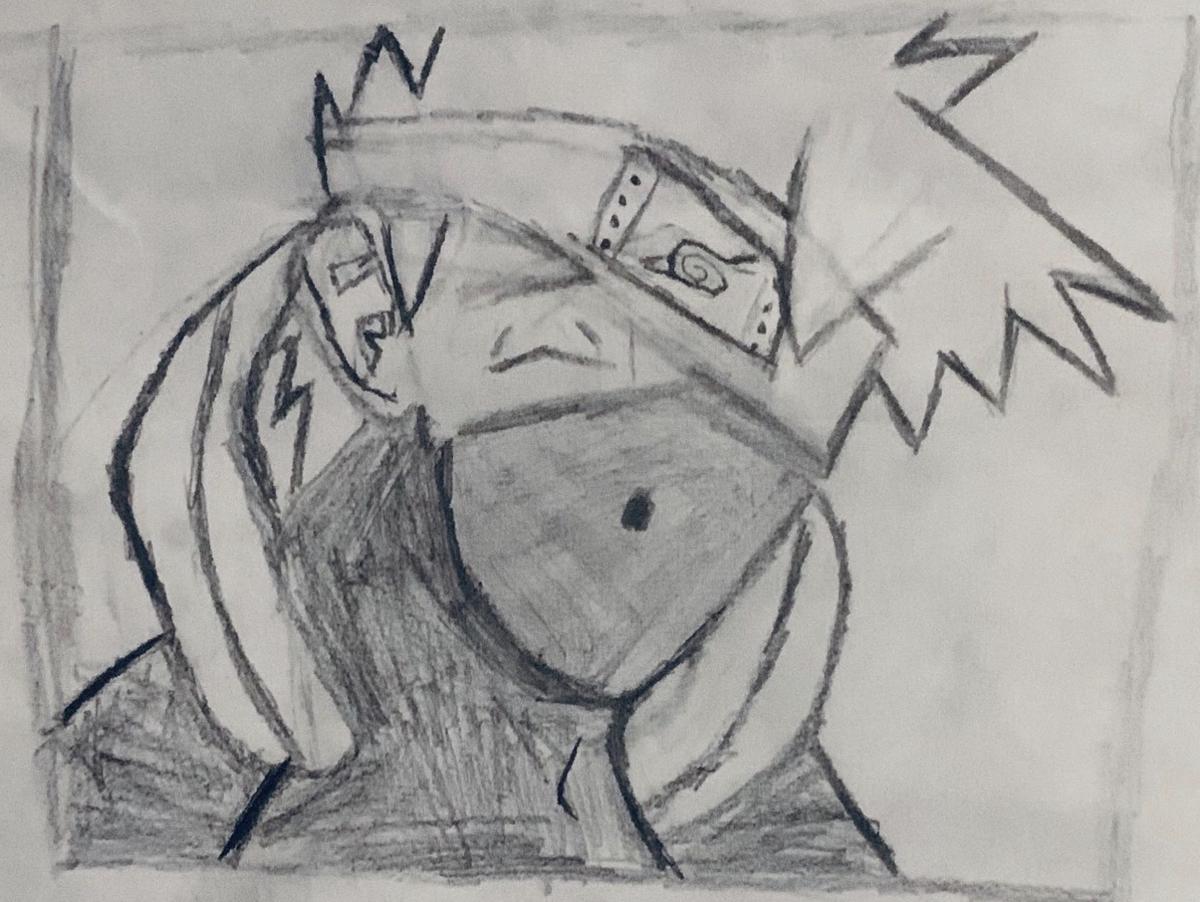 Jacob enjoys sketching his favorite anime characters. Above is an unfinished sketch he has been working on recently. 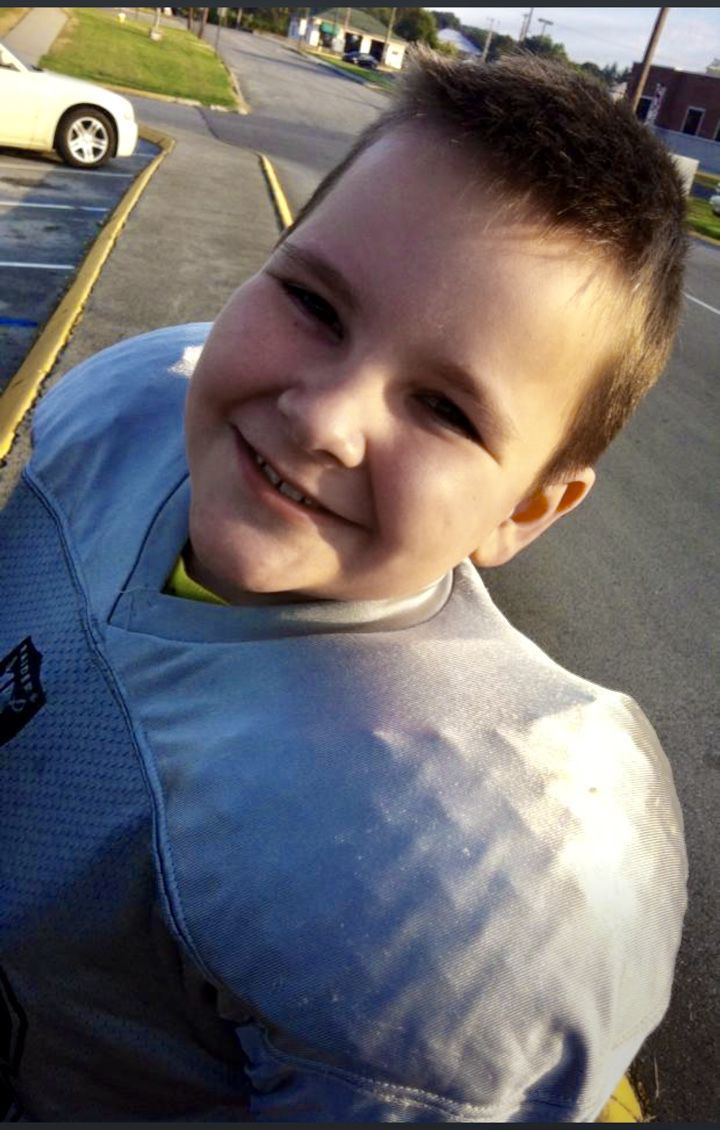 12-year-old Jacob Purscell proudly holds the keys to the new medical housing apartment that he and his mother now share.

Jacob Purscell stands next to Dr. Ray Pais shortly after Jacob was diagnosed with T-AML.

Because of complications from his T-AML treatment, Jacob’s immune system has been weakened, limiting the number of people who can come visit him. Nevertheless, his mother explained that Jacob handles everything with a smile.

Jacob enjoys sketching his favorite anime characters. Above is an unfinished sketch he has been working on recently.

12-year-old Jacob Purscell is an artist, a lover of anime, a former football player and an RMS student.

He is also battling cancer with a brave outlook and a continued smile on his face.

In May of 2017, when Jacob was just 10 years old, he was diagnosed with Ewing Sarcoma. After over a year of grueling chemotherapy and multiple surgeries, Jacob completed treatments for Ewing Sarcoma in March of 2018. He had lost some of the bone in his left leg from the surgeries, but he was declared to be in NED (no evidence of disease) remission.

However, he was diagnosed with T-AML (treatment-related Acute Myeloid Leukemia) in August of 2019.

The family needs your help

His treatment takes place in Nashville, and Jacob must stay there through at least 100 days following treatment. As a result, the family of seven has to live separately for a while, with either Jacob’s mother Jennifer Hunt, Jacob’s father Charles Fitzgerald or Jacob’s grandmother by his side constantly.

With the intense strain on the family from separation and the cost of the medical treatments, Jacob’s family needs help from the community.

“We have so much going on, and I’ve had to learn to accept any help given,” Jennifer said.

She explained that her husband is currently the only income for their family of seven, so they have set up a GoFundMe fundraising account to help cover Jacob’s medical bills.

Any donations are deeply appreciated by the family. To donate, go to https://www.gofundme.com/f/1qhlxcj3eoamlbattle

You can also visit the online version of this article to click directly on the link.

“We couldn’t have gotten this far without everyone’s help and unconditional support,” Jennifer said. “Every day I’m so grateful and inspired by our community. We’re so grateful to the school administrators in our little community. RMS and CHS staff have been so helpful, as have my husband’s employers, Jeff and Pam Kyle of K-Chemicals.”

Jennifer explained that they discovered the AML when Jacob started having unexplained bone pain.

“We contacted his oncologist again thinking, ‘something about this is not right,’” she said. “The chemotherapy he received because of that (Ewing Sarcoma) caused the secondary AML. This is not just a standard AML, it is a separate type called Treatment-Related AML. So, it’s much harder to treat. They tell you there are these rare possibilities of this happening because of treatment. That (AML) was one of the rare ones, and it happened to him.”

Because of his treatments, Jacob has been unable to attend this school year and will likely be unable to go back until next school year.

Nov. 19 was day one of Jacob’s total-body radiation treatment for AML. That day, his treatment began at 7 a.m. with another round of radiation at 2 p.m. He then had a total of four days of total-body radiation with treatments twice a day. This was followed by two days of intense chemotherapy, one day of rest and then a complete bone marrow transplant on Nov. 26 — all of this within seven days.

Another bump in the road

Things were going well for Jacob for a little while after his bone marrow transplant, but he found out at the beginning of January that he had developed GVHD (graft versus host disease).

“Basically, the new stem cells that were transplanted are seeing Jacob’s body as ‘foreign’ and are attacking several places such as his skin, eyes, brain and liver,” Jennifer said at the time. “His symptoms are pretty severe at this point, and the doctors are working hard to get it turned around, but this is a critical complication. More than 50 percent of the time, it is fatal.”

The treatment for this further weakens his already fragile immune system, and he was also diagnosed with parvovirus as a result. His weakened immune system also limits the number of people who can visit him.

Though he has still been in and out of the hospital, Jennifer explained that he was excited that he and his mother were able to move into a medical housing apartment a block away from the hospital. She explained that, as of this week, “he is getting better slowly but surely.”

Handling everything with a smile

Through it all, Jennifer explained that Jacob maintains a brave attitude and a smile.

“He’s handling this like he handles everything: with a smile,” she said. “Even on the hardest days, the most painful days, this boy has more courage and grace than I could hope to have in 10 lifetimes. He is so brave. His positive attitude is the only thing that has gotten me through some hard parts of treatment. It’s just so remarkable to watch, and he amazes me.”