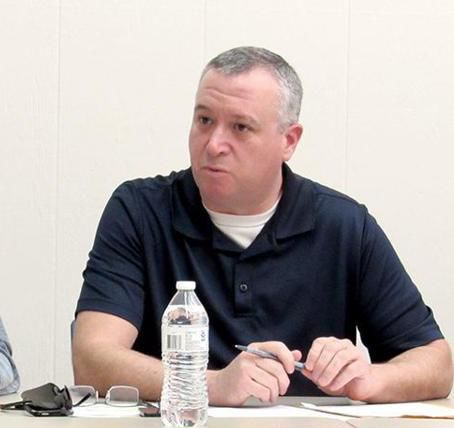 Stanley Valley VFD Chief Stacy Vaughan was not notified that the matter regarding the fire department would be discussed at the Public Buildings Committee meeting, so he did not attend.

Stanley Valley VFD Chief Stacy Vaughan was not notified that the matter regarding the fire department would be discussed at the Public Buildings Committee meeting, so he did not attend.

The Stanley Valley Volunteer Fire Department’s building lease has been a matter of some contention between Hawkins Co. Mayor Jim Lee and SVVFD Chief Stacy Vaughan and was discussed at the Feb. 18 Public Buildings Committee meeting.

Lee believes the county-owned fire hall should remain a voting precinct and community center available for public use—as it has been since the fire department’s founding in 1985—but Chief Vaughan has expressed in published reports that he and his staff don’t have the man power to support such a thing.

When Vaughan received the original draft of the new lease, he did not agree to sign it. Instead, he asked that the lease be on a 10-year basis rather than five and that the building no longer function as a community center.

After a long back-and-forth, the committee voted to increase the lease agreement to 10 years but didn’t remove the stipulations for public use. Instead, Commissioner John Metz pointed out that there were no regulations in the lease for what SVVFD can charge for the cleanup fee to use the community center.

“There’s not a usage agreement in here (the lease), so if they use it as a community center and charge a cleanup fee, there’s nothing in here about that,” Commissioner John Metz said. “So, if they could set a usage agreement and they put the cleaning fee at an exorbitant amount, nobody is going to use it to begin with, so you wouldn’t have to worry about that. There’s no verbiage in here that limits what they can charge.”

The committee will send the amended lease to SVVFD in hopes that they will sign it this time.

“I believe it may be necessary for SVVFD to vacate the premises.”

“They (SVVFD members) feel like, since they are paying all of the utilities for the building now, they want to have total control over the use of the facilities,” Commissioner Keith Gibson told the committee.

“I feel strongly that this property also be used as a community center and made available to the citizens of Hawkins County,” Lee said in a letter he prepared should Vaughan not agree to sign the amended lease. “It is my understanding that you are against the premises being used by the citizens of Hawkins County. Unless we are able to come to an agreement, I believe it may be necessary for SVVFD to vacate the premises.”

Though the building has traditionally been available to citizens as a community center, Property Manager Sarah Davis noted during the meeting that “the likelihood of someone having an event there is highly unlikely,” as the building has no running water or septic system.

“I can’t imagine having a baby shower or birthday party in a building where you can’t use the bathroom or wash your hands,” she added.

Davis has been looking into adding a septic system to the building but noted that it will be a difficult process as, “there is no adjoining property (to the fire department) that we own that is suitable for it.” Thus, the county would either have to purchase some adjoining property or ask for an easement.

Gibson also told the committee that Vaughan noted in his amendments to the lease that, “the building is not in good order and needs a roof.”

“Can we not get everyone in the same room and discuss this?”

Vaughan was not notified of the meeting, so he was not in attendance.

“Can we not get everyone in the same room and discuss this?” asked Commissioner Valerie Goins. “My concern is that this is my fire department. We’re paying our taxes, and we’re hoping to have a fire department. It looks like there is a battle going on between the Mayor and Stacy (Vaughan), and, if we all got together, maybe we could reach some sort of agreement. It’s very worrisome to me because there’s a lot of us that depend on that fire department.”

“I hope that’s not the problem—personal grievances or anything like that,” Goins added.

“If the county is wanting to put 100% of maintaining the building on the fire department, we would rather not dedicate our resources to operating a community center, unless it was in case of an emergency,” Vaughan said in published reports. “We’re in the firefighting business, and it’s hard enough to find volunteers to answer fire calls and run the duties of a fire department. Taking on the duties of operating a community center is really not within our scope of duties, we feel, and we would like to be relieved of that, and not have that.”

There had been come confusion among commissioners and fire department members, who thought the building was on a 99-year lease.

“Whoever the fire chief was back through those years might not have even known that they needed to come down and renew it,” he added. “I had even forgotten about it too, to be honest with you. But nobody in the mayor’s office notified them at that time either that they needed to renew their lease, so it just fell by the wayside. When we first leased it to them, I thought we leased it for 99 years for $1. That’s why I never thought any more about it after that five years was up.”

Gibson also told the committee that SVVFD members had already been looking into relocating their station to be more centrally located even before this issue arose. No official plans have been made for this relocation, though.

In the end, the new drafted lease will be for 10 years and will stipulate that the building be used for a community center and a voting precinct; however, the lease will not limit what is charged to use the building.