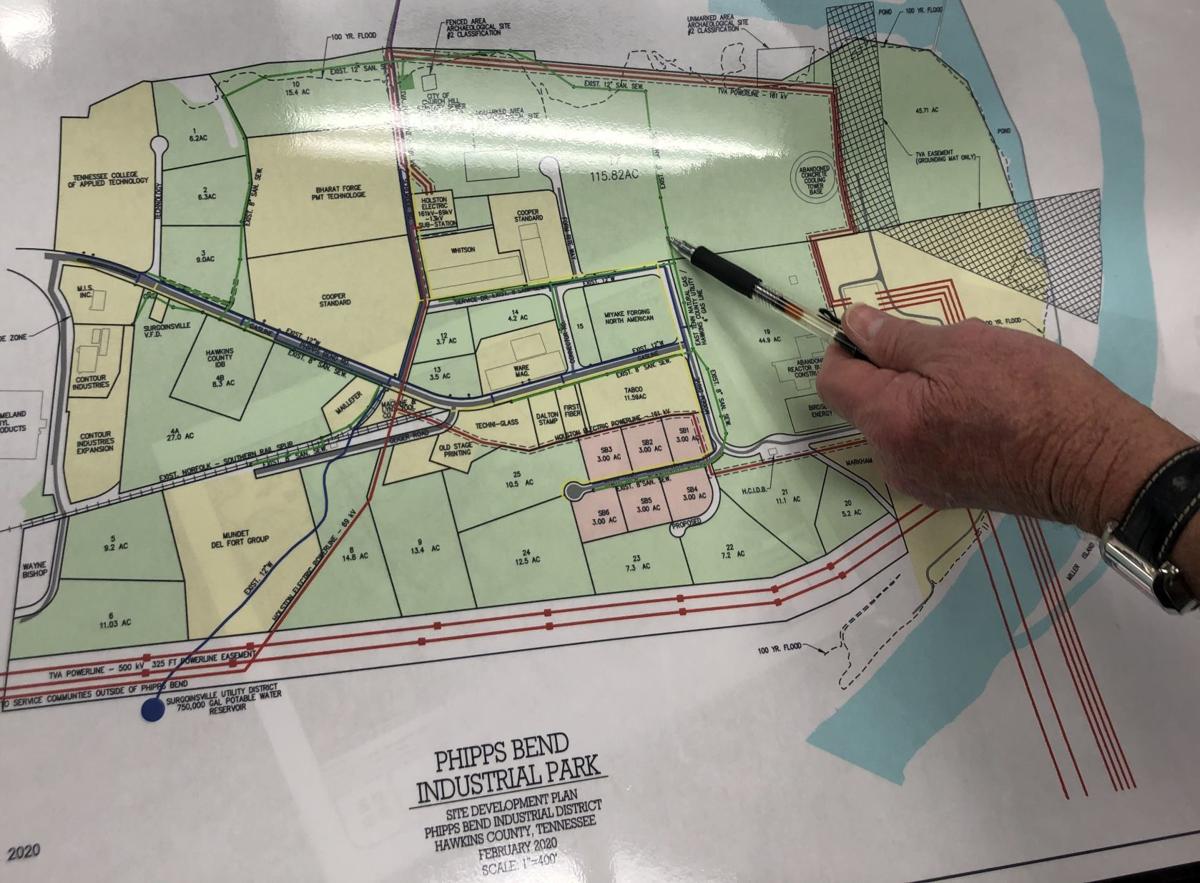 Here, Industrial Board Chairman Larry Elkins points to the lot in question. It is labeled as ‘lot 17’ on the map and consists of around 100 acres. 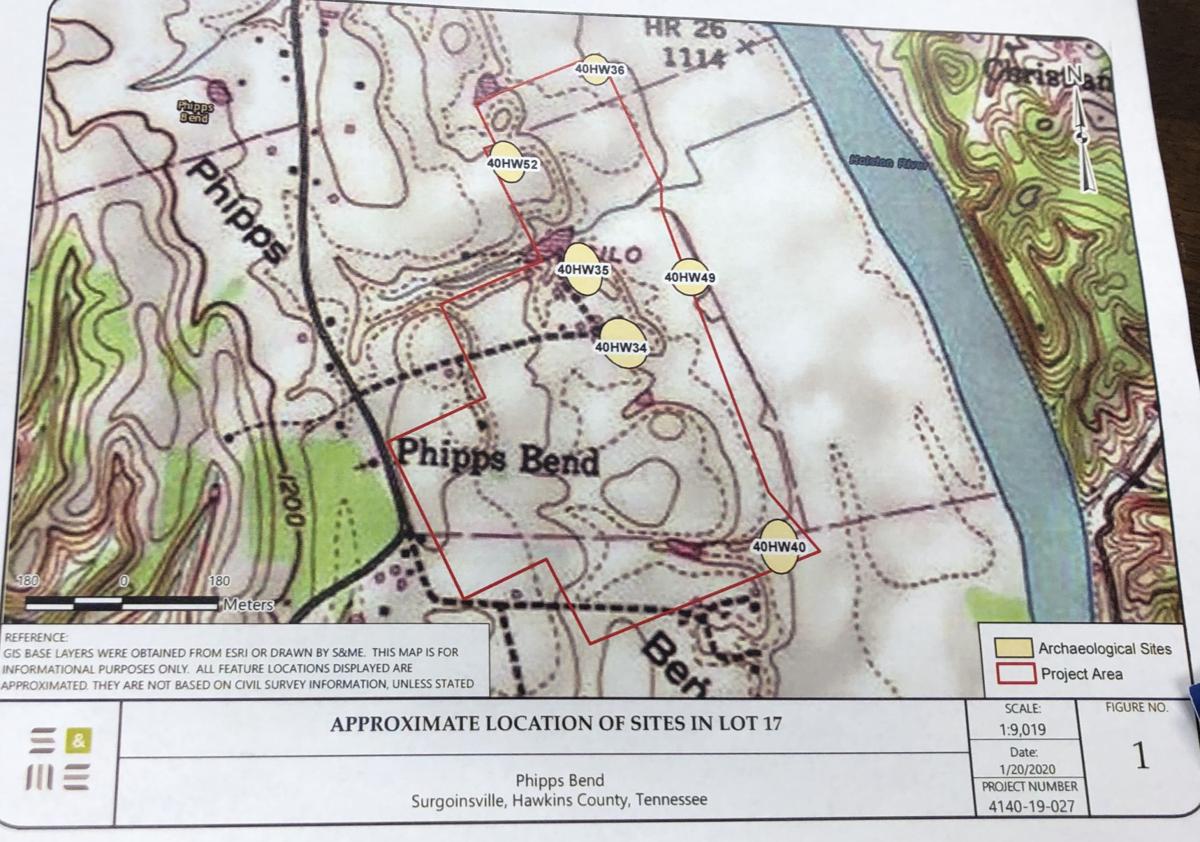 This map shows the areas within the 100-acre lot that were designated as ‘archaeological sites’ (marked with yellow circles) and must be studied.

Here, Industrial Board Chairman Larry Elkins points to the lot in question. It is labeled as ‘lot 17’ on the map and consists of around 100 acres.

This map shows the areas within the 100-acre lot that were designated as ‘archaeological sites’ (marked with yellow circles) and must be studied.

“If we can pull this together, you’ll have the largest, shovel-ready industrial site in East Tennessee,” Hawkins Co. Industrial Board Chairman Larry Elkins said at their recent meeting.

The board is currently preparing a lot containing around 100 acres within the Phipps Bend Industrial Park for sale. This particular lot is right next to one of Cooper Standard’s buildings and has never had any industry on it.

Though the site will still require “several months of intense research” before it can be marketed, Elkins told the Review that a site this large could bring around 2,000 jobs to the area.

“That really gets a lot going for you when you can tell them (potential buyers), ‘all you’ve got to do is come in, show us what size building you want,’ and we get TVA to show them what the building would look like on the site and where it would sit,” he said. “We could really have something to market with.”

A bit more work needs to be done

Before a site like this can be made shovel-ready and marketed, a ‘threatened and endangered species’ study and an archaeological survey must be completed. Issues with the sewer and water lines must also be resolved.

The sewage line currently runs practically right through the middle of the property.

“There is a possibility of not removing it, but maybe leaving it in the ground and having a sewer site come around the side,” Elkins said. “The problem with the water is, we’ve got 12-inch main water lines through the (Industrial) park, but its fed by a four-inch water pipe between them (Surgoinsville Utility District, who supplies the park) and the First Utility District. You don’t have to be a water engineer to figure out that, if you’re trying to supply a 12-inch line with a four-inch hose, you won’t get too far.”

Engineers are also planning to fill in a large ditch that currently exists on the site.

Elkins met with a representative from TVA who recommended that the board fill out an InvestPrep ™ application through TVA as well as an SDG (Site Development Grant) application. Both of these grant programs could help pay for some of the work needed in order to get the site ready to be marketed.

The InvestPrep ™grant would require a local match of around five percent, which Elkins said could be somewhere between $5,000 to $15,000.

However, Hawkins County is designated as a tier three, economically distressed community, which means that the area has more access to grant money for industrial development and isn’t required to have as much matching money as other communities when applying for grants.

“One of the things Governor Lee is trying to do is train the youth and employable people in vocational-type areas,” Elkins added. “He’s also focusing on rural and distressed area for this initiative, and we meet those criteria. Hopefully, we can pool all those resources together and possibly bring in a large industry.”

The board currently has a map showing all of the archaeological sites that were found on the site.

“Now, you’ve got to delve into it much deeper than you did 40 years ago,” he said. “Before we can get federal monies, we’ve got to do more research. So, they’ve got to go through and see what exactly did go on at this site. Basically, they’ve mentioned burned rock, which indicates that someone had a campfire. But, these (archaeological sites) are just small sites throughout the area.”

Some of the archaeological sites are only a few feet wide.

“But, there’s not a foot of ground on this property that TVA hasn’t disturbed with a bulldozer—even the places designated as archaeological sites,” Elkins said. “This (property) was farmland, trees and ponds. It was all bulldozed flat with a two percent grade going towards the river.”

Unfortunately, there are also other phases of research the site needs in addition to the archaeological survey.

“Several months of intensive research” have to be done before the site can be marketed. But, once it is up for sale, Elkins told the Review that he thinks it will be a coveted area for industries.

“Any time you’re get a site this large, you could be looking at a hundred million dollars of investment and around 2,000 jobs,” he said. “You get into a whole different plane of industries like the big tire plants and things of that nature that we want to be able to participate in. We’ve got many other lots that are available for smaller projects, and we’re always sending out requests for proposal on those. This one really gets into a different plane.”