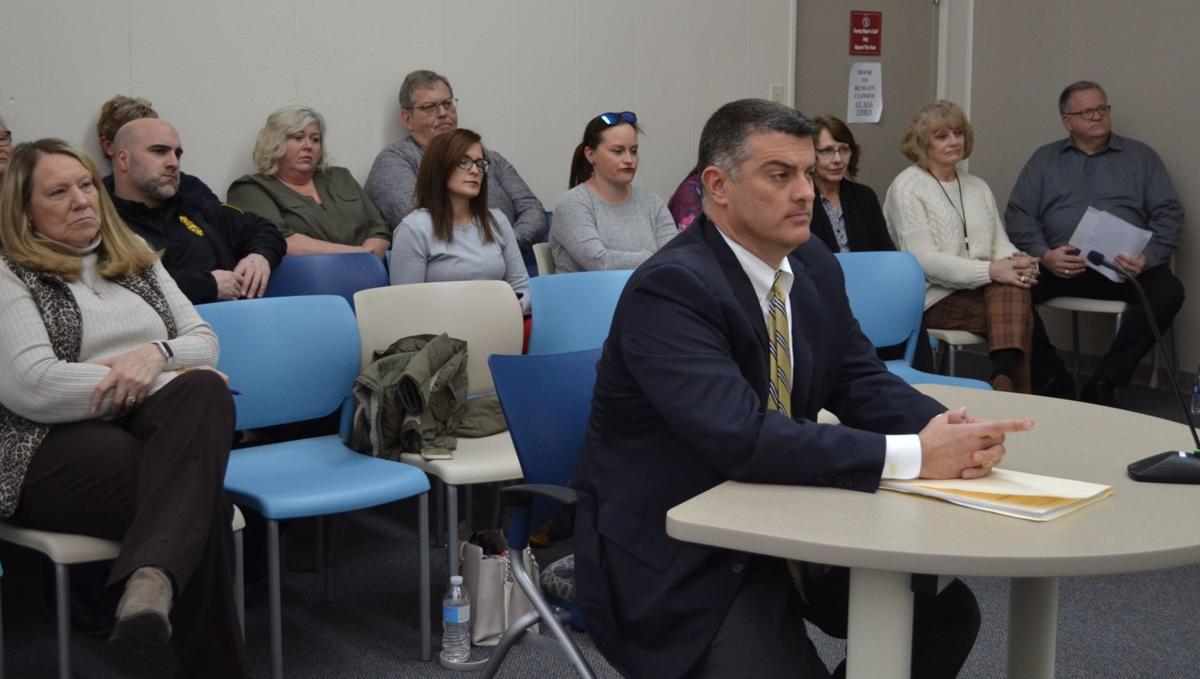 Numerous lawyers and Juvenile Court workers sat in the audience in support of Judge Boyd.

Numerous lawyers and Juvenile Court workers sat in the audience in support of Judge Boyd.

For the third month in a row, the Hawkins Co. Commission will consider whether or not to move forward with the lengthy process of making the Juvenile Judge position full time.

At several recent meetings, current Juvenile Judge Daniel Boyd has made the case for the increased time that he feels needs devoted to the position.

According to Boyd, statistics show that the county’s juvenile court case load has increased each year for the past three years. There are also numerous kinds of cases the judge must deal with on days other than the two he holds court.

However, the change from part time to full time would add around $110,000 extra to the judge’s salary, and this money would have to come from the county budget.

This is also an elected position with an eight-year term. Boyd’s term will end in 2022.

The matter was set to be discussed and voted on at the February commission meeting; however, Boyd asked the commission to pull the resolution, as he was not comfortable with the wording.

The original resolution clearly stated that, if approved through the necessary channels (which are numerous), the Juvenile Judge position would become full time and would receive a salary equal to the General Sessions Judge. However, the resolution was amended so that the number of days the Juvenile Judge worked per week would be dictated by the commission and would be evaluated annually. It was this amended version that was presented at the February commission meeting.

As a part-time Judge, Boyd is legally allowed to continue operating his law practice on the days he does not hold court. Should he become full-time, he would not be permitted to do so and would turn over his current cases to another attorney.

“With regard to the yearly review (mentioned in the amended resolution), no lawyer will be able to live,” Boyd told the commission after the amended resolution was presented. “For instance, if it is deemed full time for the year 2020, and I shut down my law practice, I rely on the income from this to support my family. Then, if next year it is deemed two days a week, not only do I have to adjust my family budget, I also have to re-start my law practice. There is no way that any lawyer can do that and plan year-to-year based on the case load.”

The committee took Boyd’s comments into consideration and revised the resolution.

“The section seven wording now says the Judge will serve on a full-time, five day per week basis and shall hold court as many days per week as deemed necessary to cover the case load,” Chairman Mark DeWitte said. “That way it is a five-day position, but it is up to the position holder to decide how many days they’re going to hold court.”

Boyd noted that the Juvenile Judge would likely hold court a minimum of four days per week.

DeWitte also noted that all this resolution is doing right now is requesting permission from the state to make any changes to the position.

“We’re just getting permission to get the state out of our way so that our county can make the decision on its own,” Commissioner Dawson Fields said.

If the state does approve of the county making changes to the position, those proposed changes then come back to the commission and must be approved by a two-thirds vote.

“Spending money to save money” Hawkins Co. Sheriff Ronnie Lawson told the committee that it costs roughly $32 per day to house an adult inmate in the county jail.

“Judge Boyd is the first one to interact with these folks in the system,” DeWitte added. “By the programs that he could implement by being full time and the assistance he could give our educational system to keep people going the right way, the money we would eventually be talking about is probably saved by not having an adult go to jail. This is the first step in spending money to save money.”

“With what we’re dealing with with the juveniles now and the case load he (Boyd) is talking about, it needs to be a full-time position,” Lawson added.

The salary for both General Sessions and Juvenile Judge positions are dictated by the state. For 2019, General Sessions Judge Todd Ross made $178,069 and Boyd made 40 percent of that, which came out to $68,438.

Should the Juvenile Judge position become full-time, it would come with the same salary as the General Sessions Judge, which would result in around $110,000 more than it currently yields.

Commissioner Danny Alvis suggested that they simply add one day to the Judge position rather than three.

“May I ask who the taxpayers are that are giving you that information?” Boyd asked.

“District three—from one end to the other,” he replied.

“I’d be glad to meet with them and talk to them about what goes on in my court,” Boyd said.

Alvis also invited Boyd to meet some of his constituents on Saturday night at Lafollete’s Chapel Church, and Boyd said he would try to attend.

In the end, Alvis cast the only ‘no’ vote on the resolution, so the full-time judge resolution will be brought before the full commission on March 23 at 6 p.m.

Alvis also told the Review on Friday that he felt the voters should make this decision rather than just the commission.

He suggested that the matter be put on the ballot at the upcoming November election. Should the majority of voters vote in favor of a full-time judge, the commission would then move forward with making the required changes to the position.

“I thought, if it’s on the ballot, then everybody has a voice on this,” he said.

In the meantime, Alvis explained that changes to the Judge position would be halted.

Placing this matter on the ballot would require intervention from State Rep. Gary Hicks, and Alvis noted that he has already spoken with Hicks to begin this process. Alvis and Commissioner Mike Herrell are also planning to bring up the idea at the next commission meeting.