“I look for next year—if the weather helps us—to be one of the best years since I’ve been here,” Bean told the committee. Much of his excitement is thanks to the passage of the Improve Act.

Because of the Improve Act, Hawkins County will see renovations on five different bridges: one on Church Hill’s AFG Road; one on Brown Mountain Road in the Beech Creek area; one on Bulls Gap’s Walker Church Road; one on old Hwy 11w in Mooresburg; and another on Rogersville’s Armstrong Road.

Bean explained that, though each bridge is currently in a different phase of completion, he expects all of them to be finished within the next three years.

The Tennessee government website explains that the Improve Act will deliver 952 road and bridge projects across all 95 counties in the state and will “address the state’s road funding for the first time in 30 years.”

Bean explained to the committee that the AFG Road Bridge repair would have cost around $5 million if not for the Improve Act.

For more information on the Improve Act, visit https://www.tn.gov/nexttennessee/improve-act.html.

The committee also voted to permanently make a portion of Hawkins County’s Ball Road private property rather than a county road. Chairman Dawson Fields explained that this matter has been discussed by the Road Committee in previous meetings.

Ball Road is a dead-end road located in District four of the county. The potential closure was brought to the committee’s attention by the owner of the property surrounding Ball Road. There are no other homes on the portion of Ball Road that would become a private route, and no school busses operate on the road.

Additionally, the Road Committee unanimously voted to keep their officers the same as the previous set of officers. Thus, Dawson Fields will serve as chairman, Charlie Thacker will serve as Vice Chairman, and George Bridwell will serve as secretary.

ROGERSVILLE — Forty-one children were treated to a one-on-one visit with Santa and Mrs. Claus on Saturday, Dec. 7, 2019, for the Hawkins Co. Sheriff’s Office’s third annual “Shop With a Cop” Christmas event.

After meeting with Santa in the lobby of the Justice Center and being assigned their very own Deputy, each child boarded Sheriff’s patrol cars and a huge military armored personnel carrier owned by the department, for the short trip down US11W to Walmart where each child got to pick out his or her gifts.

Later, the children were treated to lunch at Hardees, and to cake and ice cream at the Jail to round out their morning’s adventure.

Sheriff Ronnie Lawson said that he is very grateful to all in the community who contribute to the event, which has grown each year.

“If it wasn’t for the wonderful officers’ participating in the No Shave November with their donations and the support of some citizens, churches and businesses, we couldn’t have had the amazing success we had this year,” the Sheriff said. “To see 41 children so happy, the smiles on their faces and knowing we helped them have a Christmas that they may not have had, made it worth it all. I appreciate the dedicated officers’ taking time to make this all possible. We were all blessed by this so much!”

“This right here is what Christmas is all about,” one smiling deputy told the Review. “When I look into the faces of these little ones, they are our future, and I want them to know that, as an officer of the law, I am their friend. I think this is a great thing and I pray that I am able to be a part of it for a lot of Christmases yet to come!”

NASHVILLE — Two new reports issued this week by the Tennessee Comptroller’s Office show that local governments across the state continue to be short a total of millions of dollars.

The 2018 Report of Cash Shortages in Tennessee’s 95 county governments updates the amounts of cash shortages and thefts as of June 30, 2018. The report details money that went missing during the 2018 fiscal year, as well as previous fiscal years, including shortages noted in both Hawkins and Hancock counties.

The state’s 95 counties began the 2018 fiscal year with $972,608 in cash shortages that had not been recovered. During the fiscal year, $276,522 worth of new shortages were detected. Counties were able to recover or write-off $179,674 through restitution payments, insurance claims or other means. That left a net unrecovered shortage of $1,069,456 at the end of the fiscal year.

“Our Office takes its responsibility to uncover fraud, waste, and abuse seriously,” said Comptroller Justin P. Wilson. “Tennesseans expect their leaders and public officials to take steps to protect public money and property. Our auditors and investigators make frequent recommendations to improve accountability. Following these recommendations will help make government work better.” Both reports provide explanations of how the shortages were discovered, methods used to steal money, and legal actions taken against those responsible.

In Hawkins County, shortages were noted in both the Office of Director of Schools and the Town of Rogersville’s Water Department which, in both instances, were the result of alleged fraud and theft by Shawn Hatchett, a former Superintendent of the Rogersville Water Department, who is currently awaiting trial in Hawkins Co. Criminal Court.

In Hancock County, a shortage was noted in Internal School Funds for the fiscal year ended June 30, 2016, over a lack of financial oversight at Hancock County Middle/High School involving $900 allegedly misappropriated by a former club fund sponsor.

As part of the contract agreement the contract certified operator was to complete Discharge Monitoring Reports (DMRs) documenting the results of the tests and provide them to the School Department for filing with the Tennessee Department of Environment and Conversation. The operator signed and filed the DMRs; however, no proof could be established that any of the required testing had been performed.

On August 20, 2018, a Hawkins Co. Grand Jury indicted the former contract certified operator on one count of theft over $60,000, one county of forgery over $60,000, and 55 counts of violation of the Water Pollution Control Act.

Hawkins Co. School officials provided documentation to the local district attorney general’s office requesting that the operator be ordered by the court to pay restitution of $64,800.

Town of Rogersville — Water Department audit for the Town of Rogersville for the fiscal year ended June 30, 2017, reported a cash shortage of $263,574. In addition, town officials notified the comptroller’s Office regarding missing bank deposits.

As a result, the Office of the Tenn. Comptroller of the Treasury, in conjunction with the Tenn. Bureau of Investigation and the Town of Rogersville Police Department, investigated allegations of malfeasance related to the Water Department.

An investigative report was issued by the Comptroller of the Treasury on April 18, 2018. The investigation revealed that the former Water Department superintendent (Hatchett) allegedly diverted cash collections of at least $69,439 for his personal use that were never deposited into the Water Department’s bank account. The employee assigned the responsibility for making bank deposits to himself until a Water Department official revoked this duty on May 22, 2017. Subsequently, department records indicated the individual failed to deposit cash collections from 16 separate deposits.

Hatchett’s trial, at presstime, is tentatively scheduled to begin on Feb. 24, 2020 in Hawkins Co. Criminal Court.

An investigation by the director of schools identified approximately $900 that appeared to relate to assets that were misappropriated by a former club fund sponsor.

As of June 30, 2017, the employee suspected of the misappropriation had resigned and the Hancock Co. Board of Education decided at its March 2, 2017, meeting to not pursue the $900 shortage.

CHURCH HILL — What began as an investigation into a report of a wreck involving a possibly intoxicated male evolved into the driver’s arrest on multiple charges, including five drug-related charges, use of stolen license plate on the vehicle, and unlawful possession of a firearm by a convicted criminal.

According to a report filed by Hawkins Co. Sheriff’s Deputy Dustin Winter, he was dispatched on Nov. 25, 2019, to a location at the intersection of Goshen Valley Road and Christian Bend Road in regard to a white 2002 Chrysler van that had struck a guard rail. A witness had reported that the man was attempting to leave the scene before law enforcement could arrive on the scene, Winter said.

Upon arrival, Winter found the driver, Geoffrey Rick Johnson, 56, of Isaac Avenue, Church Hill, standing next to the van.

A check of the tag through the NCIC system revealed it to be stolen out of Johnson County.

A pat-down search of Johnson revealed in his pockets a marijuana cigarette, a small bottle containing four Seroquet pills and one partial suboxone pill, and several 9mm bullets.

After Johnson was placed under arrest, the witness told Winter that she had observed the suspect remove a black box from the van and bury it in leaves beside the vehicle.

“I recovered the box and consent was given to unlock it,” the deputy reported. He removed the key from Johnson’s keyring and upon opening the box, discovered that it contained four syringes, 27 baggies, one spoon, one rolling paper container, one gram of methamphetamine, and 5.2 grams of marijuana.

Returning to the spot where the box had been hidden, Winter said he also found a 9mm Ruger EC9 pistol that had also been secluded under the leaves.

In his report Winter said that after he had read Johnson his “Miranda” rights, the suspect admitted hat the meth and marijuana were for his personal use, that the firearm was in his possession and that he had hidden the weapon and the box containing the narcotics prior to the deputy’s arrival.

Johnson was arraigned in Hawkins Co. Sessions Court on Nov. 27 and is scheduled to appear again in court on March 30.

Hancock becomes only the 16th county in Tennessee to achieve this economic development distinction, with only 10% of the counties and parishes in the United States holding this status.

Counties work with business and education to ensure students and residents have an opportunity to earn the National Career Readiness Certificate (NCRC) which is foundational to the work ready certification.

Hancock achieved its goals in the areas of emerging (students), transitional (unemployed) and current workers who have taken the work keys tests to achieve the NCRC.

Also, the goal for the number of businesses supporting work ready was met. Site selectors are looking for a qualified workforce as they seek where to locate businesses.

Existing businesses are looking to hire the best employees and the NCRC helps with both.

The process for awarding credit is in place for the spring semester beginning in January. This is one more way that college is becoming more affordable in Tennessee and that NESCC is supporting businesses in Northeast Tennessee. 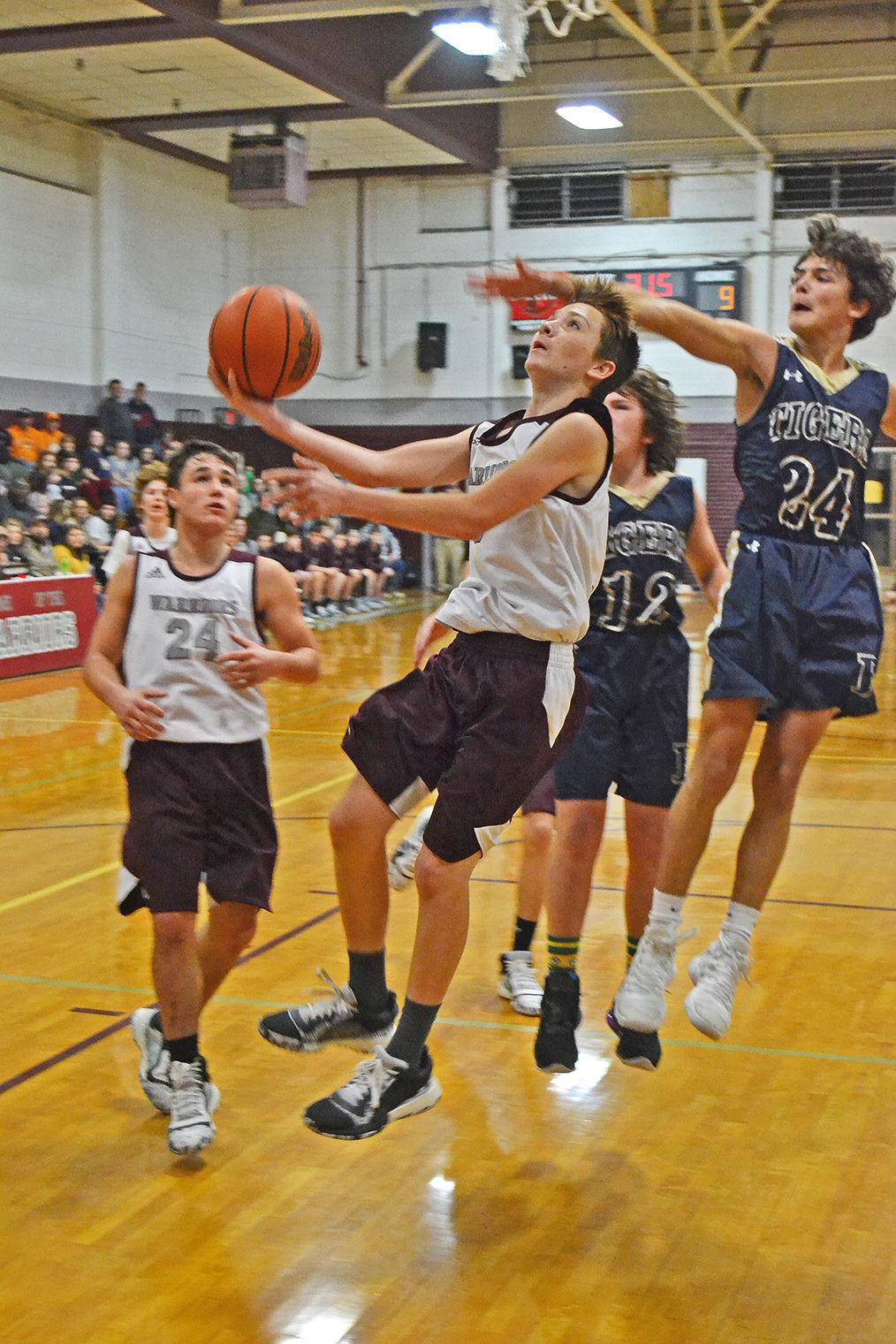